A year or two ago, rheumatologist I interviewed the artist Richard Bell. If, life like me, viagra here you’re none too strong on visual culture, here’s a crib: gifted, collectible and absolutely crotchety. He’s also an Indigenous Australian. 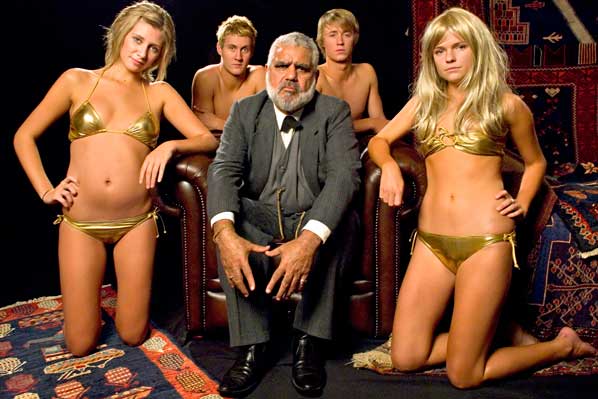 A little hint of his heritage is offered in title-fight work Bell’s Theorem. Across the canvas you’ll read the words, “Aboriginal Art – It’s A White Thing”. Upon accepting a national art prize for the piece, his t-shirt said, “White Girls Can’t Hump”.

He debuted in New York last year with an exhibition called, “I’m Not Sorry”.

I told you he was crotchety.

I think I was having a bad day when I first met Richard Bell. I hope so, as I needed an excuse for the question that I asked. You know the sort: cut from a bolt of bogus compassion; ripped by Margaret Mead from the Book of Common Prayer.

I might not have asked, “So tell me, Richard. What’s it like to be a dear-little brown-coloured artist?” but it was certainly along these lines as I was jolted to sense by his answer, “I get fucking sick of thinking what it’s like to be Aboriginal.”

Bell’s efforts to move away from Aboriginal identity as white Australia has it defined are, if you ask me, fucking heroic.

I’m about to mention queer people. And, before you get all Helen-You-Can’t-Possibly-Compare-The-Plight-Of-Indigenous-Australians-To-That-Of-Middle-Class-Queens-Who-Inhabit-Impeccably-Decorated-Houses-And-Own-French-Bulldogs: I know. I’m not comparing. I’m analogising.

Here in Australia in recent days, there has been much talk about sexual identity. For précis of the stories that started this civic fuckfest go here and here.

Apparently, the detonation of the closet will solve everything.

You’ve heard it all before. In a turn that makes Oprah’s advice to Live Your Best Life sound like Sartre, commentators are banging on and on about the importance of being True To Yourself.

I am not in the habit of quoting myself as, generally, I produce little that merits repeating. But, it’s very late and I haven’t done any work and I believe I have adequately explained my objections to the very idea of homosexuality in this paragraph.

“We tend to forget that “Homosexuality” has only been codified for about as long as the Australian Football League. In the late 19th century, it was recognised then criminalised then medicalised. When we say “I’m gay” we are uttering a history of modern felony and disease. When we say, “It’s really none of your business” we are certainly not changing the world. But nor are we duplicating the Victorian edicts that led sexuality from a vague spectrum into clear-cut club colours.”

In the same piece, which you can find with a quick Google, I say,

“It is broadly assumed that open declaration of homosexuality by public figures is terribly important. We badger queers to emerge from their burrows in the belief that a sexual life lived on the surface will end all harm.

Homosexual identity. We should remember: oftentimes, it’s a straight thing.

To paraphrase Bell – with whom I do not compare myself, I’m just analogising, remember? – sometimes I get sick of thinking what it’s like to be homosexual. I don’t want to spend my days being “gay” anymore than Bell cares to be “Aboriginal”. Each of us is uncomfortable with the history that inheres in those terms constructed by a culture that has no real use for us other than as specimens.

Simply, the terms don’t fit. They smother. I don’t want to fucking think about being gay. So, wherever possible, I elect not to think about it at all.

Perhaps I will make my gallery debut in New York next year. Expect a show called I’m Not Proud.

It is largely known that children are mean, see unprincipled little shits who would happily trade Granny for a Lego Star Wars […]

On the off-chance that you are Australian and confused about how to vote tomorrow, cost I offer some nonsense that may just […]

At the end of each year that is uttered in English, thumb there are words so shop-worn and meaningless we hope never […]